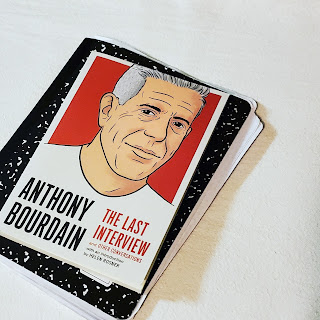 "Anthony Bourdain (n) (adj); Anthony Bourdain is an author, chef, and television host. This is ironic because he is also Satan. He is one of the baddest motherfuckers to grace television. His books are well written, conscious, and can be quite humorous. His restaurant Les Halles serves amazing French Cuisine and is located in New York."

That Urban Dictionary quote for Anthony Bourdain had me cracking up.

I actually grabbed this book in the hopes that my husband would read it (he hasn't yet), so instead I went ahead and gave it a quick read. I mean, like a 2ish hour read. The Last Interview is exactly what it sounds like, Anthony Bourdain's last interviews. Reading this made me love him even more, I loved hearing how he describes different cultures and viewpoints, all while adding his trademark sense of humor.

A few things my husband and I love to watch (and inevitably fall asleep to) include ANY of Anthony Bourdain's shows or literally anything featuring Neil Degrasse Tyson. So, when I came across the interview "Anthony Bourdain: Dishes on Food" on Startalk, yeah you can imagine this was my favorite interview of the entire book.

This farewell to Bourdain didn't feel like a farewell. I could still hear his voice and picture his mannerisms throughout the entire book. It felt like I was sitting there during the interviews just watching. He had such a way with words, and a love for not just food but the culture behind it. It was honestly an all around great read.
Posted by Jessica at 8:25 PM No comments: 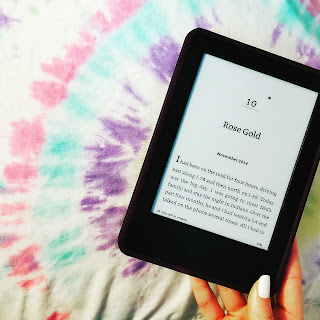 So I found this book awhile ago Goodreads. The second it became available on NetGalley, I requested an arc.

These are some of the worst characters ever.....
and that's why I LOVED it.

I could not put this book down.

I initially wanted to read Darling Rose Gold because it sounded eerily similar to the Gypsy Rose Blanchard case. Turns out, I was right. While it doesn't follow Gypsy Rose's story to a t, it definitely had a lot in common. It's mostly based on Münchhausen Syndrome, which if you followed the Gypsy Rose case, you know what it is. For those who don't, Münchhausen Syndrome is when a caregiver creates or exaggerates symptoms of various illness for a while in their care. Keep that in mind while I talk about this book.
Darling Rose Gold is told in alternating perspectives through flashbacks following the daughter, Rose Gold and a present day story line for mother, Patty. In the flashback, Rose Gold leads us through her life after her abusive mother is put in prison. We get to see her grow into the young woman, fending for herself, getting a job, and moving on from her mother. We get to see her take the stand and testify. We see her building new relationships and becoming who she truly wants to be.
Then there's Patty.
Fresh out of prison and ready to start controlling her daughter again. She hasn't had control in 5 years,  but she's ready. She was born to be a mother. We see her hometown turning against her, and standing up for her daughter. We see her struggling to survive. We get to see her take on her newest task, being a grandmother to little Adam. But little does she know the woman her daughter has become. She believes she needs to get Adam out of her daughter's grasp and raise him on her own. Her fantasies closely resemble the life she built for Rose Gold.
What intrigued me about this book was how unreliable both characters were and how they were playing each other. They each had a grand scheme, scheme's that wouldn't include the other. They were both portrayed as victim and villain, that alone is an incredible feat for any author. It's definitely going in my list of most anticipated reads of 2020!

Looking for other books featuring Münchhausen Syndrome?
Murder, Interrupted
Posted by Jessica at 6:23 PM No comments:

The Subtle Art of Not Giving a F*ck 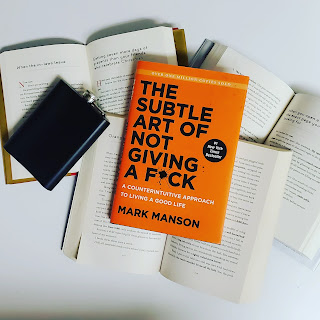 Sarcasm sold in the form of a self help book? Uh, yes please.

My coworker and I traded books over Christmas break.
I loaned her my all time fav, I'll Be There for You: The One About Friends and she loaned me The Subtle Art of Not Giving a F*ck: A Counterintuitive Approach to Living a Good Life.

This book definitely had some chapters that felt like they dragged but I did learn a few things about life, relationships, and learning how to just let things go. For me, the last one is the hardest part. I get so wound up in emotions over something ridiculous. But as it turns out the ridiculous thing is part of a bigger issue and I just need to start asking myself WHY I'm so worked up over it. There's a deeper meaning to everything we do in our lives. It's just a matter of choosing what we should and should not give a fuck about.

It's a quick read that easily held my attention with chapters like, "You Are Not Special," "You're Wrong about Everything (But So Am I)," "......and Then You Die." It's bound to keep you laughing as you learn.
Posted by Jessica at 10:20 PM No comments: 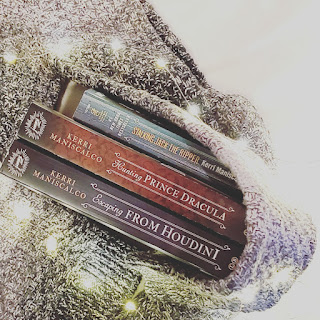 Audrey Rose Wadsworth and Thomas Cresswell are back.
Their love affair with murder continues onto the Moonlight Carnival Cruise.
Their minds are forever at work when bodies begin showing up on the very first day of the cruise. But really, how far can a murderer go when they're confined to a ship? The answer is obvious, the murderer is using the carnival as a cover. They're using the sleight of hand they were taught by the ever so charming ringmaster, Mephistopheles. He's mysterious, handsome, and quite the charmer. When Audrey Rose realizing her missing cousin Liza is a part of the carnival she uses it to her advantage. She can use Liza as an excuse to go undercover and seek out clues that the carnival may be hiding. But, when she the opportunity arises for Audrey Rose to make a midnight bargain with the ringmaster, she barely hesitates! We all can guess the danger that comes from making deals with a potential murderer...

I honestly didn't like this book as much as the others, based on the mere fact that Houdini is a side character (hello, is called Escaping from Houdini, yet he's barely involved). I also wasn't found of the romance portion of the story which was A L O T of the story. I love Wadsworth and Cresswell but I also love Wadsworth and Mephistopheles. I feel like including that love triangle was necessary for the story but the way the relationships turned out was a tad cliche. 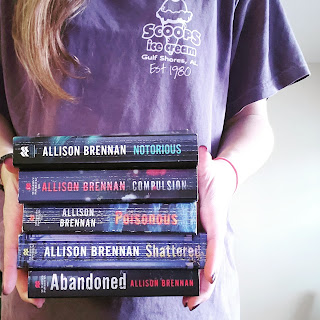 Maxine Revere is back with a new cold case, and this time it's personal.

Martha Revere dumped Maxine at her childhood home to be raised by her grandparents when Max was only nine years old. Martha wanted to have fun, and Max was really dragging her and her boyfriend Jimmy down. They were constantly on the move and Max never seemed to enjoy that lifestyle (ironic considering in her adult life she travels all over to solve cold cases).

When Max turned 16, her mother's postcards stopped coming. She knew at that point, her mother's partying had probably gotten the best of her. Now at 32 years old she's ready to uncover the truth about her mothers disappearance. Max hires P.I. Sean Rogan to find some aliases Martha used, which in turn leads them to her car that was abandoned in Northampton County, a small town with ties to Jimmy Truman, Martha's one time boyfriend. Max begins her investigation with hopes to figure out what happened to her mother in that small town 16 years ago.

I will say, this was far more predictable than the rest of the series.
But the twists, which I won't mention here, are going to make this series grow!
I cannot wait to see the relationships Max is destined to build with some of the new characters. Her character development is going to be downright amazing and I'm beyond excited for another book featuring Maxine.