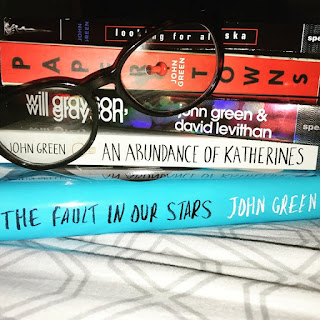 Will Grayson is a straight guy, with a gay best friend. But Will Grayson is also a gay guy looking for a boyfriend. John Green and David Levithan did an amazing job creating these two characters and taking us on their journeys. The Will Grayson (Grayson) we meet first has a don't care attitude and a very fabulous, large, best friend named Tiny. We follow Grayson through his story of finding love with Jane and helping Tiny try to fall in love again. The other Will Grayson is carrying on an internet relationship with a boy named Isaac. When they finally decide to meet, Will gets more or less "catfished." But that doesn't stop him from possibly meeting the best thing to ever happen to him. Both Will Grayson and Will Grayson cross paths at an adult video store in Chicago because of some very interesting coincidences. The story continues to Tiny's very fabulous musical and to the end of the novel. There's so much I left out, but I don't want to be the person to ruin it for my fellow bookworms!

Looking for the rest of the series?
Hold Me Closer (book two)

Other titles by John Green:
Looking For Alaska
The Fault in Our Stars
Paper Towns
Turtles All the Way Down 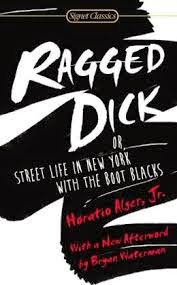 Ragged Dick has been described as a "rags to riches" type of novel. But personally, I'd say it feels similar to Catcher in the Rye. A young boot-black, Ragged Dick, is trying to make a living in this world. He shines shoes and makes enough money for breakfast and maybe a show at the Old Bowery. Until one day he overhears a nephew and his uncle talking about New York and offers to show the boy, Frank, around the city. They spend the day becoming close acquaintances and grow quite fond of each other. The uncle makes Dick an offer of five dollars to start a savings and make something of his life. Agreeing, Dick begins his new life with $5 and a new suit. Eventually, he strikes up a deal with another boot-black and begins his education and rises to his full potential. Ragged Dick is a short read, but it is definitely a good one!
But answer this:
Rags to Riches or Catcher in the Rye?

Posted by Jessica at 1:07 AM No comments: