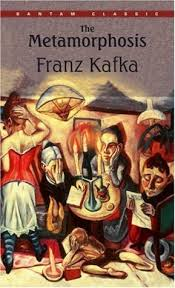 The Metamorphosis is exactly what it says; Gregor Samsa, a traveling salesman, wakes up one morning as a disgusting and horrifying bug. He tries to talk to his family and his boss, but winds up terrifying them. He lays in his room trying to adapt to his new body. His 16 year old sister picks up the task of cleaning his room and bringing him food. While he is very grateful for her doings, she doesn't know. She sees her brothers as an atrocious bug. The family is slowing losing more and more money, so they rented out 3 of the rooms in the house. Gregor wrecked that plan. One night, while his sister was playing violin for the roomers, Gregor wandered into the living room only to be run back into his room. The family talks of giving up hope that Gregor will ever actually come back. They feel as if they must get rid of the bug. The next morning, Gregor is found dead in his room. All of the other reviews I have read on this book have said it has a deep underlying message; fear, loneliness, and isolation. I feel like I missed that part of the book. If Kafka would have written more of Gregor's feelings in the book, it may have made more sense.
Posted by Jessica at 8:54 AM No comments:

The Boy with the Thorn in His Side 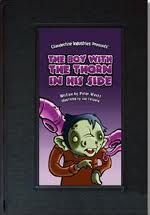 Clandestine Industries Presents: The Boy with the Thorn in His Side. These 43 pages put you inside the head of Pete Wentz. He starts out saying this story absolutely does not have a point; it was just one of his reoccurring nightmares. We meet The Boy. We follow him through this new world he has created. His parents may not notice him, but the sisters, Rattail and Flattop do. They show him the happy things about this world. Later on, they see what they think is a person. It is The Boy's old Buddy doll, hanging from a noose in the tree. This world is really just all of the forgotten and misled things. It was a little odd, and a little dark, but it makes you realize that this is really everyday life. Pete Wentz's message came across loud and clear to me. The Boy is gold.
Posted by Jessica at 9:42 AM No comments: