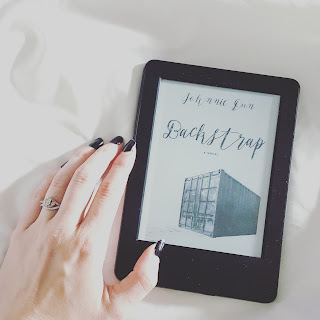 Okay, so honestly I don't know how I feel about this book.
But I will say it definitely would make a killer movie with the right cast.
Callie and several of her friends are ex-military. They all served in Iraq together and all made it out alive. But how did one of them manage to get killed while working for Latin Leather, a clothing company. Sure, they had all dabbled in drugs and partied and most of their time after the military was spent in a hazy room with vivid memories.
Turns out Latin Leather isn't just clothing, it's enough drugs to supply an entire company. But they already knew that, so why was Rachel sent to Guatemala for a business meeting?
Did she get in over her head?
Is there more than just drugs involved?
Could they have uncovered a human trafficking ring?
Callie and Angus set off to find out leaving their lives at home behind.
Huge shout out to NetGalley for auto-approving me for this book.
While it wasn't my favorite, it was still a quick read that I did enjoy.
Posted by Jessica at 6:22 AM No comments: 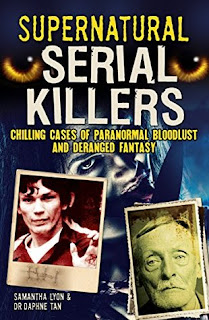 Werewolves, vampires, and witchcraft, oh my!
Oh wait, you mean they're just serial killers?
Supernatural Serial Killers: Chilling Cases of Paranormal Bloodlust and Deranged Fantasy focuses on serial killers that have animalist of Satanic characteristics. It starts in the 1800's with vicious werewolf attacks, at least that's what society thought it was. There murders were so brutal they could not fathom how anything other than an animal could have caused the gruesome scenes. When it was apparent that werewolves were no longer popular, the murderers obviously had to be vampires. No person in their right mind would commit murders and drain victims of their blood. They were drinking directly from their victims wounds and could not control the impulse to do so. Some even went as far to cannibalize their victims as a means to gain power. Witchcraft came about in the 1900's when murderers began placing blame hallucinations, deities, Satan, even God Himself.
All of the murders could be described in great detail and oftentimes had an motive behind it. These killers were not werewolves, vampires, or witches. They suffered from mental illnesses that were not yet discovered, therefore society could not comprehend the violence happening around them. They found it easier to blame a mythical creature than to believe that someone in their community could commit such heinous crimes.

Huge thank you to NetGalley for giving me an advanced copy of Supernatural Serial Killers!
I was given this e-book many, many months ago and apologize for just now getting around to reading it!
Posted by Jessica at 12:50 AM No comments:

Dear Nobody: The True Diary of Mary Rose 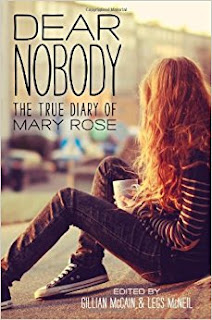 Dear Nobody was pitched as Go Ask Alice (but not a hoax).
Okay, I loved Go Ask Alice and all of the diaries in the Anonymous series.
Hoax or not, most of them were very believable.
So I expected Dear Nobody to live up to those expectations.
It didn't even come close.
It was ridiculous, not believable in any way, and if any of this was actually happening I'm wondering why in the hell the law wasn't involved.
Dear Nobody focuses on a girl that has CF (Cystic Fibrosis). However, you don't know that until much later in the diary. The diary instead focuses on her drunken nights, fights with her mother,  excessive amounts of drugs, and a new crush every other day.
At 14 years old, this girl has lost her mind and there is literally no way she's coming back. Time and time again she complains about how terrible her life is but then also makes note that she really isn't doing anything to change it.
Sympathy is not something I had in any way reading this.
I had no desire to continue reading about Mary Rose.
But I happened to be on a 10 hour flight and brought only this to read.
Please, please, please do not waste time or money on this book.

NetGalley provided me with an e-copy of this book months ago and I just now got around to reading it.
If you want to read published journals that may be a hoax but are much better than this...
Check out:
Go Ask Alice
Jay's Journal
The Book of David
Lucy in the Sky
Letting Ana Go
Calling Maggie May
I only have 3 of them reviewed at the moment, but I will work on getting the rest up soon!!
Posted by Jessica at 4:46 AM No comments:

Midnight at the Bright Ideas Bookstore 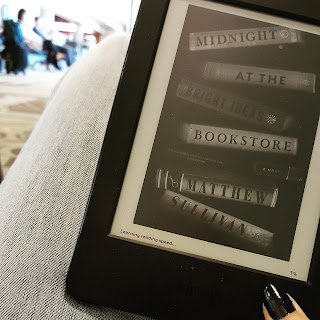 It's closing time and Lydia is locking up at Bright Ideas, the local bookstore she works at. But something tonight just doesn't feel right. Are all of her regular bookfrogs gone or are some still in the building? What Lydia finds is that all but one of her bookfrogs are gone... but one is not leaving her. Joey, the quiet kid that claims books saved his life, has hanged himself on the upper level of the store. Under complete shock, panic, pain, guilt, Lydia finds a childhood picture of herself in his pocket... But why would he have that? He only shopped at her store, they weren't exactly friends.
Turns out, Joey thought very highly of her and actually left all of his belongings to her. All of his belongings and many, many secrets for her to uncover.
But uncovering Joey's secrets means she has to uncover many of her own. Can she relive her experiences of the HammerMan? Can she handle rekindling her friendship with Raj? Is she prepared for the overwhelming amount of pressure bestowed upon her all because of Joey, a boy she barely knew?
Turns out, Joey has secrets he didn't want to keep.
Raj had secrets he didn't even know existed.
Lydia knew who the HammerMan was all along.
But did her father have more information than he knew?

I love, love, love this book and am so appreciative of NetGalley for providing me an advanced copy of it!
Mark your calendars, Midnight at the Bright Ideas Bookstore hits shelves June 13th!
Posted by Jessica at 4:14 AM No comments: 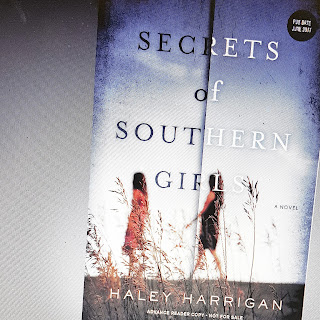 How would you live your life if you thought you killed your best friend?
How would you feel knowing you get to grow older than 17 years and she doesn't?
How would you sleep after watching her drown?
How would you survive motherhood knowing you took that from her?
But what would you do if you found out all of that was a lie?
Reba had no idea how much her life was going to change the day she met Julie. Scared, innocent Julie who just lost both of her parents. Reba knew they would be close friends and made sure they would tell each other everything. Until one day....they didn't.
August, the only black boy in Lawrence Mills, Mississippi, wanted Reba for himself. He knew her father was a racist, but he still needed her touch. He needed Reba to know how much she meant to him, even if they decided to runaway and start a family together. He wanted to be there.
But Toby wanted Reba too. He always had, and knew she wanted him BAD. He often finds himself painting depictions of Reba, again, and again, and again. He knew her better than anyone else. He knew the full truth. He knew about her love affair with August, he knew about her fights with Jules, he knew about how sneaky she was, he knew she was his, he even knew what happened when she died.
Most of the book is told through Julie's perspective, with sprinkles of Toby and August throughout. However, we also get a taste of Reba's little purple journal, her diary. Honestly, I wish the journal was more frequent throughout Secrets of Southern Girls. Towards the end, we're reading journal entries one right after the other. Wherever the story was at that point is where we were at in the journal as well. Overall, it was a fairly decent book. Not quite the thriller I was hoping for, but the secrecy of it all was exciting to me. I often wondered why it was so scattered, but I understood it all in the end.
Huge thank you to NetGalley for giving me an advanced reader's copy to review!!
Mark your calendars, Secrets of Southern Girls hits shelves on June 6th!

Check out an exclusive excerpt!!
Posted by Jessica at 12:27 PM No comments:

Flirtin' with the Monster 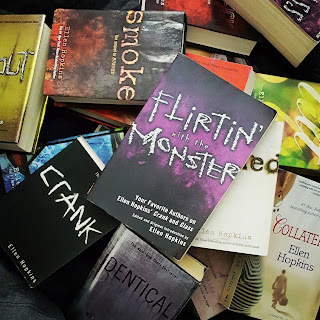 Flirtin' with the Monster is a collection of essays focused on addiction, primarily the addiction portrayed through Kristina/Bree in Crank and Glass (this was published before Fallout).
I believe that everyone anywhere can relate to the topics discussed in this book. Each one of us has either known someone with an addiction or struggled with addiction themselves.
In the Crank Trilogy, Ellen Hopkins chose to discuss her daughter's struggle with the monster, specifically crystal meth. Told through the eyes of Kristina/Bree, we truly understand the internal and external struggle of addiction. It gives us an opportunity to experience addiction without ever actually touching a drug.
Now, why would anyone want to experience drug addiction?
The answer is simple.
We want to know the unknown.
In this collection, many authors, psychologists, law enforcement, and even Ellen's children discuss how addiction affects everyone in their own way. It is not something only the addict struggles with. Many people do not understand the struggle that comes with addiction, but Ellen Hopkins put pen to paper to understand her daughter's addiction.
Thus, Crank was born and readers all around the world have praised Ellen for writing about such a controversial topic with such confidence. For writing a book that showed she understands. For writing a book that quite possibly saved their lives.
I will recommend this book to ANYONE and EVERYONE that comes in my path.
ANYONE struggling with addiction.
ANYONE that has a friend of family member struggling with addiction.
EVERYONE that enjoys Ellen Hopkins writing.
You will not be disappointed.

Adult Fiction:
Love Lies Beneath (LLB #1)
A Sin Such as This (LLB #2)
Collateral
Triangles (Tilt #2)

Anthologies:
One Death, Nine Stories
Behind the Song
Life Inside My Mind
Posted by Jessica at 11:10 PM No comments: