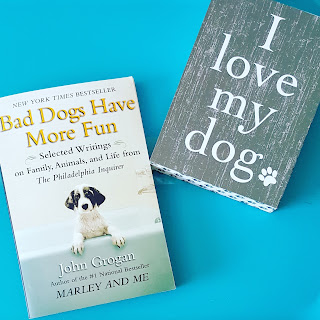 John Grogan is a best selling author, often writing about dogs, his family, and life. He's best known for his lovable lab, Marley, introduced in the 2005 hit, Marley & Me.
Honestly, I only read the Animals portion of this book (pages 59-106). When I began reading Bad Dogs Have More Fun, I expected each section to deal with pets in the family and the chaos they create. I found this book in the Pets Section of my local bookstore and saw the puppy on the cover and my eyes just glazed over. I thought Perfect! Another dog book to obsess over!! But I quickly learned that this book does not 100% belong in the dog section..
The cover? Yes.
The author? Yes.
The content? Just barely.
A lot of the Animals portion was the author complaining about his dogs and other people who think their dogs are much worse than his atrocious Marley. Yet he attributes all the good things happening in his life to Marley. That dog changed his life. Marley changed his family relationship, his will to write, and led him onto the "best-sellerdom" for the rest of his life. John Grogan is a household name now and all of that is thanks to the dog that he constantly complained about.
If you're a dog lover like myself and wanted to read a quirky book about dogs wreaking havoc and bettering our lives, don't grab this book first; grab another. 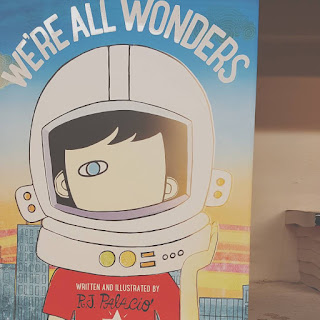 R.J. Palacio released an illustrated storybook outlining the main idea of Wonder. I love that she created Wonder for an even younger audience. By creating this storybook, she 's opening the eyes of children everywhere by teaching them that people are different. Young kids need books like these to learn how to associate with people of all colors, abilities, features.... It just creates an atmosphere for both the child with disabilities and the child who has never experienced another child differing from themselves. I love love love this book and I hope that it takes off in the same way as Wonder did! 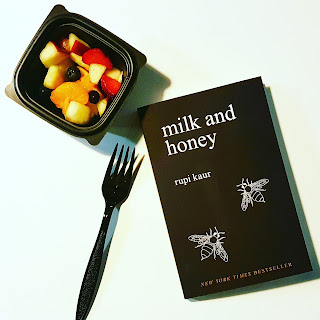 This post should really be titled "Why We Need to Stop Talking about Milk and Honey."
Working at a bookstore, I sell dozens of copies of this book every day.
I hear people say:
"This is my favorite book of all time."
"My friend told me about how great this book is."
"I can't wait to start reading this!"
"It's so insightful and inspiring to women everywhere."
What I want to know is how they could say ANY of that about THIS book.

Milk and Honey is broken into 4 sections: Hurting, Loving, Breaking, and Healing.
The book starts with a young girl getting raped by her father. She witnesses the abuse of her mother at his hands and she wonders how this could be okay. How could someone you love hurt you so bad? It then turns to her first relationship with someone and how the euphoria is so beyond her control. She's happy. But that relationship doesn't end well and she basically hates herself but keeps repeating that she is so much better than him anyway. But the hurt is too strong for her. It ends with her taking control of her life and embracing who she is as a women, but it's still hard to tell what exactly happened....

This is told entirely in poems. However, the placement of the poems hardly make sense throughout the book. She also has some pages that literally have a "poem" of 4 words. The book also has illustrations to pair with the poems, but again some of them make you stop and say "What in the hell does that have to do with anything?"

So, before you run out and drop $16 on this book, maybe actually find out what it's about. I still haven't quite grasped the full concept and I honestly don't think I ever will. 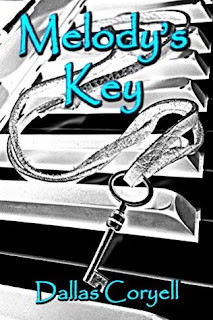 Special Spotlight for Melody's Key by Dallas Coryell!
Dallas sent me an ebook to review but also gave me an exclusive excerpt to share with all of you!!
Check it out!!

"It's just an expression, I assume you have those in America?" This time Tegan completely intended the playful sarcasm that dripped from the comment. She even ventured a slight grin to put him on the defensive a little, but Mason was quick with his reply.
"Yes, we have them. For example, don't judge a book by it's cover."
Mason had smiled disarmingly when he said it, but the underlying message to her was clear. Considering what happened at the pub, perhaps she had been a tad hasty in her judgment of his character. Tegan bundled the tools she had been cleaning and attempted to pick them up all at once in order to move them into the shed, but before she could take two steps they began slipping from her hands. Just as she expected to see the entire bunch go crashing to the ground, Mason's hands appeared and encircles hers, stabilizing the load. His hands were strong, but soft, and their sudden steadying warmth took her completely off guard.
She had been careful to avoid looking directly at him during their entire exchange so far, but her discipline wavered for one instant and she allowed herself to meet his gaze. She immediately regretted it. His eyes were two fiery emeralds that seemed to have already been waiting millennia for her to find them. The depth they held was something she had not expected; there was profound suffering there, but also something wild and passionate and unbridled... like the feeling she got while walking through the estate gardens after a summer storm.
Somehow his eyes burned through the walls of her meticulously constructed defenses as if they were flash paper. She felt as though he was somehow seeing her... the real her, instead of the protective facade she normally projected to people she didn't know. In that instant of unexpected vulnerability Tegan was surprised to find she was capable of anything. She felt the boundaries and inhibitions that normally constrained her fading like a winter sunset.
A moment after Tegan felt the hurricane begin to stir within her, she smothered it for fear of being consumed. Where in the world is this coming from? She had only been looking at him for a moment, but it felt as though they had been staring at each other for hours. She abruptly pulled her hands free, which sent the tools clattering loudly into the dirt. In truth, she had forgotten they were suspended between their interlocked hands. Grateful for the distraction, she kneeled down and began gathering her fallen load, which he immediately assisted her with. Between them, they got all the tools to the shed in one trip. As the electricity of the moment faded, Tegan began feeling silly for even thinking such ridiculous things. I know nothing about him. She made a mental note not to look into his eyes again. There was a reason so many girls went crazy over him, and he probably knew exactly what he was doing with those eyes... and that crooked smile.

Melody's Key came out last summer and is available on Amazon now!!
Keep your eyes open for my review. :)
Posted by Jessica at 11:47 PM No comments: