The Pier Falls and Other Stories 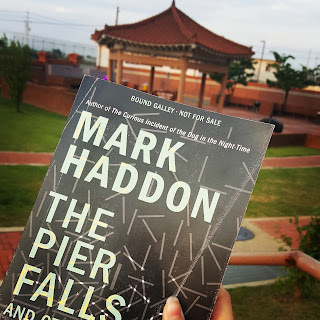 So over a year ago, I snagged an advanced copy of The Pier Falls, but just now found the time to read it. Mark Haddon, author of one of my all time favorite The Curious Incident of the Dog in the Night-Time, released this collection of short stories and I'm honestly not sure how I feel about it. However, the overall theme? Doom & gloom. There are nine stories in this book, but I've decided to pick my top three favorites and write about those in this review. So, here goes nothin'.

The Pier Falls:
(15 pages)
The title story and by far the best one in the collection. It starts on a crowded day with beach-goers milling about, enjoying the day. When the pier begins to collapse and fall and people are dying and running and searching for their loved ones. It only takes an hour and a half for this memory to be burned into the minds of those watching the horrific scene unfold. 64 people are dead and many more injured. Reading this story was almost as if I was there watching it. I could picture every last detail and could feel the pain and horror of those witnessing it.

Bunny:
(27 pages)
This story was so grotesque, but incredibly well written. Bunny is an extremely overweight man who can no longer care for himself. His mother has been cooking, cleaning, and caring for him for the past few years. That is until Leah shows up and changes his life. This young nursing student begins caring for him, but more importantly begins spending quality time with him. She makes him feel like a human again, not just a large waste of space. She then asks to marry him and continue their lives together.... but with the dark theme hanging over this collection of stories, I'm sure you can imagine what happens.

The Woodpecker and the Wolf:
(40 pages)
This story was odd. I felt a strong connection to ABC's Lost and J.R. Stewart's Nirvana. A crew has been sent many light years away. When something malfunctions, some of the crew has to take one for the team. Becoming doctors, gravediggers, mothers, fathers, and corpses. Each malfunction causes another to die and the remaining crewmembers have to sanction off part of the ship. Waiting for help to come is becoming tiresome and seemingly useless. Will anyone survive? Will help ever come? No one knows what to expect, but what comes is revolutionary.

Looking for other books by Mark Haddon?
The Curious Incident of the Dog in the Night-time
Posted by Jessica at 3:24 AM No comments: 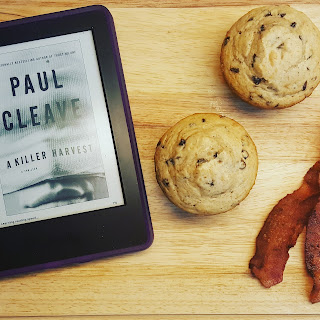 yes.
yas.
YASSSSSS.
So this was not quite the nail-biter as Trust No One.
Well, not until about 70% of the way through the book.
THEN BAM, EVERYTHING WAS HAPPENING AND I WAS SO EXCITED AND SO SCARED AND THIS IS THE DEFINITION OF THRILLER.
Joshua Logan is different. He is convinced there is a curse over his family. Maybe because he was born blind. Maybe because his birth parents died when he was young. Maybe because his new father is now dead too. But Mitchell Logan was on the police force and made sure Joshua was taken care of in the upmost way possible. He was going to give him the gift of sight.
After the surgery, Joshua only has one eye that truly works.
But for some reason, he's recognizing faces he has never seen before. He's not just recognizing voices or descriptions brought to life, he's seeing it with his NEW own two eyes. He's seeing visions and dreams so vivid, there's no way he could be imagining these things.
Could cellular memory be the cause of this?
Do other people experience this after surgery?
It's like the race car driver effect. When you get a heart transplant from someone who use to be a race car driver, you suddenly feel a strong urge to start watching Nascar and feel the adrenaline pumping through your veins.
I so wish I could get into the ending of the book, but there is no way I can talk about it without giving everything away. Just know, this book was fan-freaking-tastic.
Thank you NetGalley for hooking me up with another of Paul Cleave's book!

Looking for other books by Paul Cleave?
Trust No One
Posted by Jessica at 10:37 AM No comments: 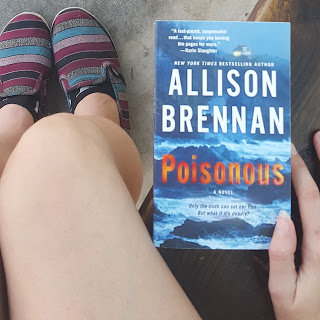 O.M.G.
Okay it's no secret that I love Allison Brennan.
It's really no secret that I love Maxine Revere.
So obviously, I loved Poisonous, it's actually my favorite in the series so far.
Poisonous revolved around internet drama, but not the bippity, boppity, teen bullshit that most people think of.
I mean yes, all of the characters were kids, but it was so much more than that. The story starts over 14 months ago, at least that's when cyberbully Ivy Lake was pronounced dead. It actually started much earlier than that. As a way to gain popularity, Ivy started a gossip blog that was all "true". It ruined many friendships and showed many people's true colors, Ivy included. The amount of attention her blog, Instagram, and Twitter got fueled her ego and gave her a sense of self-worth. A few months before Ivy died, Heather Brock committed suicide when Ivy leaked a pornographic video of Heather and her boyfriend. But for some reason, Ivy targeted one person at time, sometimes more, but continuously posted nasty and malicious things online so that people would know her name.
Well, stepbrother Tommy was no longer allowed in the house because Ivy's mother thought he killed her. She thought he was strike again and target his younger half sister. But Tommy wasn't like that, he was a little kid in a grown man's body, a gentle giant, if you will. (Honestly, pictured Tommy as a modern day Lenny from Of Mice and Men).
When Tommy penned a letter with help from Austin and Emma, it grabbed Maxine's attention and she knew she had to investigate.
Accident?
Murder?
Suicide?
Max knew who to call and who needed to be on her side for the case, but she never expected it to end the way it did. Not only did she begin to understand the amount of hostility this family had towards each other and will probably continue to have forever.
This book is messy, energetic, intense, and amazing.
I loved every second of it and if you like investigative thrillers, you will too.

Posted by Jessica at 7:29 AM No comments: 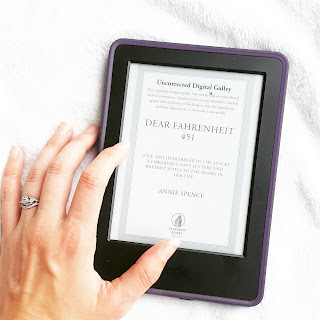 It's official, I love this book.
Dear Fahrenheit 451: A Librarian's Love Letters and Break-Up Notes to the Books in Her Life is such a cute idea and Annie Spence definitely delivered!! This book consists of letters Annie has written to books, whether they be happy or sad letters, each book she picks up is getting one. Some of them are life long favorites but have to retire because their spine is obliterated. Some of them hadn't been checked out, or even picked up, in over five years. Some of them may help improve your life. Some books are instant hits and some are total flops. But one thing is certain, Annie knows what she's talking about.
I loved that she has spent so much time around books and she understands working with books is HARD. Many people are only looking for the book because the movie trailer just came out, um newsflash THE BOOK IS ALWAYS BETTER.
But honestly, I found myself laughing throughout this entire book.
Some of the funniest parts to me:
-One in three men will say their favorite book is Hatchet by Gary Paulsen
-Going to a party and making The Great Gatsby references to the bookshelf you're talking to
-Running to the kids section when life gets too real
Utmost respect from me to you Annie, you wrote a great great book and I will highly recommend this to everyone I know! Big shout out to NetGalley and Flatiron Books for granting my wish and providing me with this wonderful read!
Mark your calendars, Dear Fahrenheit 451 hits shelves September 26!

Looking for some of the books mentioned in Dear Fahrenheit 451?
Twilight Saga
In Cold Blood
Room
Divergent Trilogy
The Hunger Games Trilog
Posted by Jessica at 12:42 AM No comments: 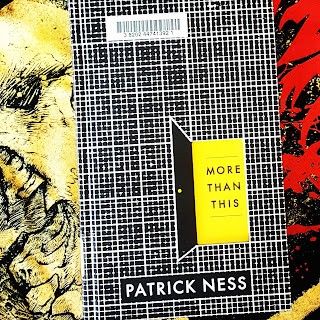 I spent all week reading this book, only to be left with the same questions I had to start with! This book is definitely out of my normal genre, but it was WONDERFULLY written. However, I don't know that I liked it. Usually when a book pisses me off, I still love it. But for this one I was just confused the majority of the time.
In the beginning, Seth thought he has woken up in hell; his own private hell where he relives memories before his death. He knows he's dead, but why is he in his old house with no one but himself? So then, two others show up Tomasz and Regine. They had spotted him a few days earlier but didn't know what to make of him, that is until he started running their direction when The Driver was after them. The Driver needs them, he is supposed to be taking care of the bodies, but somehow these three have gotten out.
This is when Regine begins explaining what they know and what they think is happening. This revelation made me think, "Oh, okay. So they're in cyber limbo." You know, when you've died, but haven't quite died because you have some greater business to finish. So they're trapped between reality and online. Online being the finish line.... or so I thought.
Turns out, the whole world has gone online and the world they are currently living in, just the three of them, is reality. But reality was abandoned when life got too hard and people decided to alter their memories to a happier outcome. Which makes Seth wonder if he can alternate between the two lives. Maybe he can log in online and hangout with his real friends and Tomasz and Regine can pull him back out into reality.
But of course that's where the book ends.
Overall, I enjoyed More Than This more than I expected.
Yet, it wasn't at all what I had expected.

Looking for other books by Patrick Ness?
The Knife of Never Letting Go (Chaos Walking #1)
Posted by Jessica at 11:59 AM No comments: