So guys, I've been talking to author Janelle Peel and she was telling me about this AWESOME giveaway she's doing! But, it's all set up through her Facebook page Clutch Mistress, so head over there to check it out!

She is giving away ONE autographed poster of her book Allied Mage!

Here's how to win:

Post the link to one of your favorite books by Janelle Peel to your Facebook wall
Then comment the word DONE on her post
(here is the link)
It's that simple!
She will draw a random winner on her Facebook page on November 6th at 3PM PST!!

If you've never read Janelle Peel's books it's your lucky day because Vampire Mage is FREE with Kindle Unlimited November 3rd and Allied Mage is FREE on November 2nd - 6th!!

I've included the links to access her books below!!

Choose Your Own Autobiography 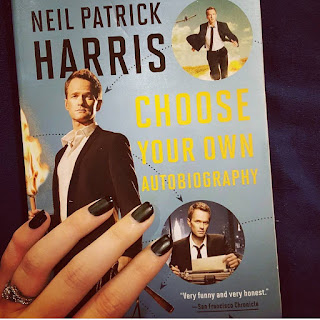 NEIL PATRICK HARRIS YOU ARE MY GOD.
Okay, that's a bit extreme but forreal I love him.
So I actually found out about this book by watching old interviews with NPH and found one of him discussing what inspired this lovely book, Choose Your Own Autobiography.
Going into this you have to know, it is not like a regular autobiography, it's based off of the Choose Your Own Adventure children's book (which were Neil's fav).
So this book is not meant to be read as a book, it's meant to be read as several different stories about Neil and his life, oftentimes ending in him just out of reach of survival.

However, I read this as a regular book because jumping from chapter to chapter, hundreds of pages apart, would drive me absolutely bonkers (but hey he knew we were out there and even left us a secret: Kungaloosh).
But honestly, I loved this book, even if I read it wrong!
It chronicles his life staring as a dog in a school play, to Broadway's Rent, not to mention full drag as Hedwig! It also talks about my fav show, How I Met Your Mother, Barney Stinson even makes an appearance. But his life isn't all tv, movies, and broadway. It's got some loooooove in it too, specifically David Burtka and their two freaking precious kids, Gideon and Harper.

So if you want an adventure full of drinks, food, magic tricks, and interviews, this is the book for you.

P.S. NPH patiently waiting for an update with details on A Series of Unfortunate Events!!!
Posted by Jessica at 6:40 AM No comments:

Check out this summary of Remember Me Always and try your hand at the giveaway listed below!

Shelby is nervous to start her senior year after spending the whole summer away from home. After all, it's hard to be carefree when you're trying to protect a secret.
Shelby was in a devastating car accident, and everyone in town thinks that she was undergoing more physical therapy in Denver. Instead, Shelby's mother enrolled her in a clinical program to stop the panic attacks that started after the crash. The treatment erased Shelby's memory of the accident, but she can't help feeling as if a piece of herself is missing, that the treatment took more than the doctors claimed.
So when Shelby starts hallucinating a boy with dark and mysterious eyes, she knows it must be a side-effect of the clinical program. Except, you can't kiss hallucinations. And this boy insists that they know each other and are in love...

Sourcebooks Fire is giving away THREE COPIES of Remember Me Always, head over to rafflecopter to try to win!
Posted by Jessica at 7:09 PM No comments: 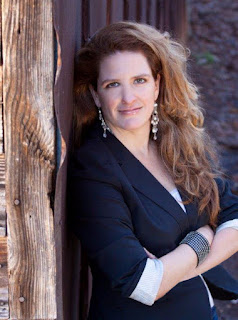 I have the great pleasure to introduce you all to Cyndy Etler!
Thanks to Cyndy and Sourcebooks Fire for providing this awesome opportunity!

When did you first realize you wanted to be a writer?
Hmm... can I flip that question, make it a shorter answer? Here, let's try this:
Did you ever not want to be a writer?
Nope. I've wanted to be a writer since I've had conscious thought. I think my becoming an author was some planned-before-the-womb stuff. I don't have many pictures of myself as a kid, but in one of the three, I'm sitting on the Macy's Santa's lap, clutching a book in my chubby toddler hand, grinning with all I got. I was using the book to show Santa what I meant when I said, "This, dude. See how there's a name on this here book cover? This is what I want." As I got older, the drive to write got fiercer.
Your newest book is We Can't Be Friends: A True Story. What's it about?
Officially, it's about getting out after 16 months in super-abusive "teen treatment program" Straight Inc., and returning to my old high school. It's about trying to fit in, as a brainwashed cult-kid freakazoid. It's about the boys I found who would spend time with me, because I had big books and desperation. But more than all that, for me, it's about a teacher who recognized my talent as a writer. And let me know it, publicly. It's about finding that thing inside oneself, that tiny glint of diamond through the dark, compacted rock. It's about trusting that glint enough to chisel it out.
What inspires you to write?
I have two answers for this question, an inside answer and an outside one. The inside: I'm driven to write by the stories that play in my head. Or maybe they're not called "stories," since they're things that have actually happened to me. Whatever the terminology, my whole life has been, and continues to be, a psychedelic rollercoaster ride. Stuff happens to me that just doesn't happen. It seems to run in my genes.
For example: my father was a famous composer. Leonard Bernstein directed his music for an opening concert at Lincoln Center. My mother, 32 years his junior, was his student at hoity-toity Smith College. Before my parents were wed, my father was married to the Tootsie Roll heiress; that was in between his first and second marriages to the same woman.
At age 13, I was homeless and alone, having run away from my mother's second husband, an alcoholic abuser. When I turned 14, I was locked up in that place Straight- which the ACLU described as "a concentration camp for throwaway teens"- when a distant relative saw it on the local news. The news cameras were there because First Lady Nancy Reagan and Princess Diana were visiting the program.
Umm... what?
At age 16, I was morbidly depressed and suicidal, I was an early recipient of a newly, released wonder drug called Prozac. I needed a double-dosage to make me not off myself, but it worked. I'm here. And happy.
And that's just a smidgen of the first 16 years. I have a maybe-crazy belief that interesting stuff happens to me so I have stuff to write about. Because I have to write.
Which leads me to the outside answer: I'm inspired to write by all the kids who need to connect with other struggling kids through books. When I was young, I didn't fit in. I didn't make friends easy. At least, not with humans. But books! Books were my friends. In books, I found kids who were living like me, who understood me. I found hope that things would get better. I got my needs met. For 17 years I've taught these kids in alternative schools. I've taught with my books. Kids still desperately need books like mine, that tell the truth, that tell their stories. Their need inspires me to write, and to write honestly.
Where do you write?
Talk about some crazy rollercoaster nonsensical stuff, the answer to this question is a perfect example. I'm a former street kid, right? I've been abused and arrested, kicked around and locked up. I've been poor, I've been broken, I've cleaned rich people's toilets to keep a roof over my head. And yet. Somehow. You know where I write? In my little custom writing room. With its tall, anrrow window and its plank-wood floor. Which I helped design. When I husband and I were planning our dream house. Which is no longer just a dream. Umm...how?
If you could have a date with any fictional character, who are you meeting tonight?
Toss up. Either Ben Zion, the brilliant, kind, homeless, Los Angeles reincarnation of Jesus in James Frey's The Final Testament of the Holy Bible, or I-Man, the brilliant, Rastafarian, Jamaican, school bus dwelling reincarnation of Jesus in Russell Banks' Rule of the Bone. Either way, I'm sure I'd get the real true story behind it all. Umm...yes.


So there you have it!
Posted by Jessica at 6:54 AM No comments: 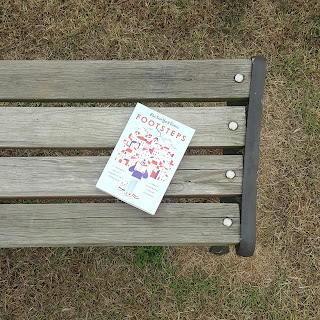 This book was not at all what I was expecting it to be.
Honestly, F. Scott Fitzgerald caught my eye and I picked it up on impulse.
With that being said, I could have lived without it.

Footsteps is a collections of essays written and published in The New York Times.
Each essay is based on a literary pilgrimage, which let's be real that is an AWESOME concept. However, many of the authors discussed in this book were what I consider "classic" authors. Think Fitzgerald, Lovecraft, Hemingway, Twain, Kerouac, etc...

But in all honesty, I've never read many of these authors, making it hard for me to grasp the reality behind the pilgrimages. However, I was thoroughly impressed with the Brothers Grimm and Lewis Carol (both of which I have read). I didn't realize how much I didn't know about these authors, but this book has inspired me to go find some of these all time classics and broaden my literary horizon.

Huge shout out to Blogging For Books for providing me a copy for this review!
Posted by Jessica at 4:11 AM No comments: