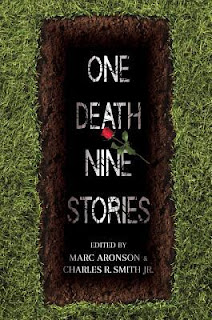 At age 19, Kevin Nicholas is found dead from an apparent suicide, just like his daddy.
His death affected family, friends, and classmates.
What could be so terrible that a 19 year old wants to take his own life?
His death, but more importantly, his life is told through the eyes of nine people. They considered him a friend, a lover, a brother. He was an alter boy. He was mischievous. He was Captain of the Cross-Country team. He was a boyfriend, not a good one but he was. He was a leader. He was a business major. He was full of secrets, darkness, but most of all he was damaged.
Being a psychology student, reading about Kev and his life really made me angry. He needed help and no one noticed. They offered help after his dad died, but never when he had a bad day. No one could believe Kevin killed himself, but it was so obvious that he wanted to. When someone takes their own life it affects everyone around them, sometimes people they don't even know.
That being said, suicide is a big deal and is making its way into the news more often, most recently Chester Bennington from Linkin Park. I bring that up because his death affected so many people. He felt alone in a world that adored him and that should be an eye opener to society.
Reading through this book made me realize that unless you are directly affected by suicide, the topic is off the table. Most people don't want to talk about the issue because if they don't then maybe it's not as bad. I connected most with Candy. Not because she also referred to herself as damaged, but because her first love is now dead. If you have EVER been in love, you know your first love will always mean something to you. A few years ago, my very first boyfriend committed suicide as well, along with countless others from my high school. It's hard, especially when that boy isn't exactly embraced by their community. The point is, people are not going to get help. They are not going to reach out. They already feel alone. So make sure you hug your friends and let them know that you understand. Ask them how they're doing. I promise it will help them in the long run.

Looking for authors in this anthology?
Ellen Hopkins (Crank Trilogy + more)
Posted by Jessica at 4:42 AM