The End and Other Beginnings 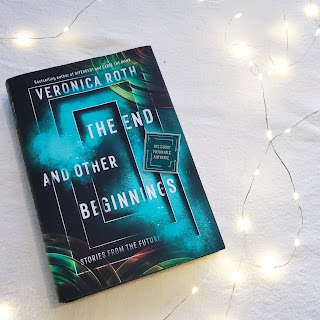 When I heard Veronica Roth was writing a book of short stories based in the future, I knew I had to have it. But I didn't realize how much I was going to love it.

Each story was so well written! I was enthralled by the first four stories and then felt kind of indifferent about the last two, which take place in Shotet territory (aka the same universe as Carve the Mark). Each story had darker undertones than I was expecting but they were fantastic nonetheless.  The very first story in the book "Inertia" was my favorite. It felt like the future, but was also heavily rooted in reality. It deals with pain, depression, love, and loss.

Even though I was not a huge fan of the Shotet stories, "The Transformationists" was great. It leads a boy through what is essentially a detention center for a crime he didn't intend to commit (but ya know, currentgifts are tricky). Each story tackled a real topic with a futuristic twist and it worked incredibly well. The End and Other Beginnings is now not only one of my favorite Veronica Roth books, but also one of my favorite short stories collections as well.