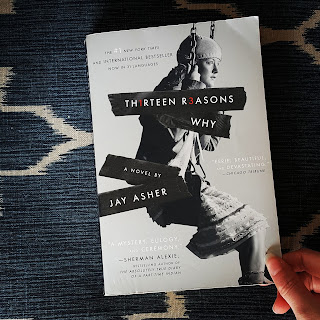 I've avoided this book for so long.
In the 10 years since it was released, I neglected to read it or even glance in the direction of this book.
Recently, I went home to see my family and my sister handed me a copy and said "Read this. Now."
I am so glad she pushed me to finally read Thirteen Reasons Why.
Jay Asher's debut novel is told through cassette tapes. Specifically, cassette tapes recorded by Hannah Baker, a girl who committed suicide a few weeks earlier. Clay never thought he would hear her voice again. But he definitely didn't want to hear it as she worked her way through the 13 Reasons Why she killed herself. He didn't want to believe he could have had a part in her death.
What did he do to Hannah?
How could she do this to them?
How do all the stories fit together?
How? How? How?
Hannah tells us. She tells everyone in the tapes exactly what they did to land a spot on her tapes. She wants them to feel the way she felt. She wants them to understand why she's gone. She wants to understand herself and the only way to do that is to explain from the very beginning....
Starting with Justin Foley.