Tweak: Growing Up on Methamphetamines 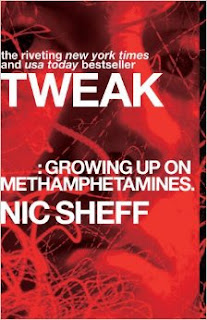 Nic Sheff has struggled with addiction since he was a teenager. He's experimented with everything from marijuana, ecstasy, crack, cocaine, heroin, and crystal meth. In Tweak, Nic tells his story of battling addiction and the endless cycle of drug usage. Told in a diary like form, we learn first hand the effects his insane drug usage has on himself and his family. Drugs give him a high that he "needs" to deal with his every day life. He's fresh out of rehab in the beginning of the book until he meets back up with Lauren and starts the cycle all over again. The entire novel Nic ruining his life, cleaning up, ruining his life, and getting help again and again and again. I was so excited to read Tweak, but it took me much too long to even place myself in Nic's shoes. The drugs made him sound so pitiful and empty. But the time he spends in rehab doesn't sound much better. I will say Nic's story definitely depicts what it is like to have an addiction, but the underlying issues of his life make it harder to understand exactly why he wrote Tweak for us.
If you or someone you know is struggling with addiction, get help.
To keep up with Nic Sheff, follow his blog The Fix.