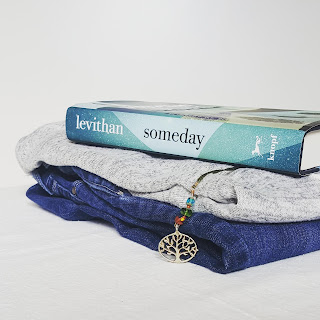 I've been waiting for this book since, well, basically forever. I was not disappointed! If this doesn't sell you on the fact that this series is deeply rooted in love is love, then I don't know what will.

So this picks up after A leaves Rhiannon with Alexander; not to mention the continuation of Reverend Poole as someone like A.

I don't really know how to give a summary of this book so I'm just going to jump right in.
Rhiannon and Alexander have such an adorable relationship. They are so beyond comfortable with each other, you'd think they were together for years. But when A comes back into Rhiannon's life, everything kind of falls apart. She begins spending less time with him and more time with whoever A is that day. Now, A feels grounded around Rhiannon. She's the only one that sees him for who he really is (I'm using he as the pronoun because that's how I see A).

So, Reverend Poole had his life taken over by X. X is like A, he travels from body to body without ever knowing who he will become. But he's found a loophole, he can stay for longer than a day. He's set himself up with his own bank accounts, made a life for himself, while borrowing the time of someone else. When he finds A is someone living the same type of life, he wants more. He wants to talk more with A but is going about in a way that makes A nervous. He's hurting people close to A, he's tearing families apart, he's ruining lives...all because he believe A is going to bring him power. He believes A is someone he can mentor.

There was far less romance in this book than in the others, which was quite beneficial to the book. If I'm getting the right feeling, David Levithan has set this up to be an even bigger series. I love, love, loved reading Someday. Everything about this series has been fantastic and has honestly taught me so much. I'd love to hear the various versions of A and X that everyone has had!