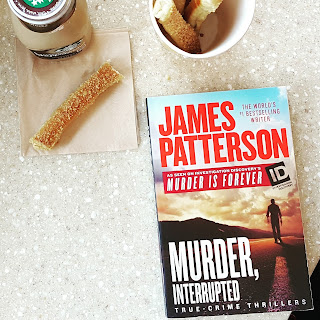 I've never been a huge James Patterson fan before, but his new true-crime thriller collection might be changing my mind! Murder, Interrupted has 2 true crime stories. These cases came directly from the show Murder is Forever, on the ID Channel. So let me break each story down for you.

Murder, Interrupted
Frank Howard is living not one, not two, but THREE different lives.
Yeah, you read that right.

#1 Takes place in Texas and includes his wife Nancy and their 3 adult children.

#2 Moves us to California with mistress Suzanne, who he claims he's going to be leaving his wife for.

#3 Introduces us to Mr. John, a character who is embezzling millions of dollars from a client, who is hell bent on killing his wife, and is a straight up sociopath.

So when Frank devises a plan on how to kill his wife, it involves a hit man. For years he fantasizes about how it should be done, but ultimately leaves it up to the guys he's hired to do it. The only problem is, he hired a group of well known meth heads who can't even get the job done. They worked up the courage to kill Nancy...but somehow a gunshot to the head DIDN'T KILL HER.

Nancy couldn't believe her husband had anything to do with her attempted murder. Their children couldn't imagine a world where there father was capable of something like this. After Frank was bonded out, he moved back into the house with Nancy (she is literally so much stronger than I would have been in this situation). After two years, he finally went to trial. With tons of testimony from Nancy, Suzanne, his children, ex-client, and the original hit man, the jury found Frank guilty after a mere two hours of deliberation.

Mother of All Murders
I'm sure you guys have all heard of Gypsy Rose and her mother Dee Dee.
The news of Dee Dee's death and the disappearance of Gypsy Rose shocked their small Missouri town. They had joined together to create a life for this single mother and sick little girl. They welcomed them into their homes with open arms only to shockingly discover it was all a hoax.

Gypsy was never really sick, not in the least. But Dee Dee was suffering from Munchhausen Syndrome by Proxy, which made the way she raised Gypsy incredibly diabolical. More or less, the idea was to commit fraud, tricking everyone, including Gypsy, into believing her daughter was suffering from a wide variety of illnesses. Illnesses as severe as leukemia, asthma, sleep apnea, muscular dystrophy, and even went as far to have Gypsy tube fed. The only problem was doctors were only finding symptoms, but nothing that showed the actual illnesses described.

But this was the only world Gypsy had ever known.
A life so paralyzing that she actually believed she was paralyzed!
When she began wanting to do normal things with kids her age, such as dating, Dee Dee shut it down almost immediately. Feeling trapped, Gypsy signed up on a Christian dating app and met Nicholas Godejohn. Through the subtle communication between Gypsy and her doctors, pastor, and friend Aleah, she began realizing her mother was feeding her lie after lie while barely feeding her real food at all.

Gypsy devised a plan, one that including Nicholas saving her from her mother.
A plan that would rid the world of Dee Dee and all of the pain she caused her.
She masterminded how a boy she had never met would kill her mother.

Looking for other books featuring Münchhausen Syndrome?
Darling Rose Gold
Posted by Jessica at 1:58 AM