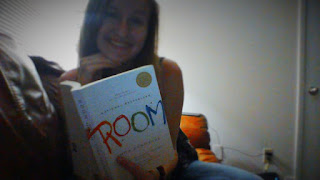 Room is by far one of the best fiction novels I have read all year.
Our narrator, Jack, is turning 5. All he knows is his Ma and Room. Ma and Jack do all sorts of things together, like run track, watch the TV planets, make art masterpieces, play a yelling game, take baths, make an egg snake, and hope for Sundaytreat. They do all of these things from the confines of Room. Old Nick comes in sometimes, but only at night when Jack is counting his teeth in the Wardrobe. When he's not counting his teeth, he's counting the number of squeaks Old Nick does on the bed. Jack doesn't know about Outside. All he's ever known is Room. But Ma knows different, she was 19 when she met Room. She was 21 when Jack came along. One day she decides they need to get out of Room and the only way to do that is for Jack to be "scave" a word sandwich for scared and brave. He has to play dead. Old Nick has to take him away. Dead, Truck, Wriggle Out, Jump, Run, Somebody, Note, Police, Blowtorch. Can they really escape from Room? Can Jack make it in Outside?

Hands down, great book. If you haven't read this you should! Jack is an amazing storyteller. He'll have you, laughing, crying, and utterly confused all at the same time. Emma Donoghue, you are an amazing author!

Try Not to Breathe 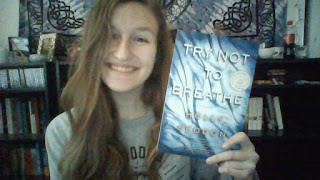 Thanks to NetGalley, I was graciously approved for Try Not to Breathe, Holly Seddon's first novel.
Alex Dale is not your everyday journalist. Jacob Arlington is not the best husband. Amy Stevenson is not the best witness. At 15, Jacob's girlfriend Amy was abducted, raped, and left for dead. 15 years later, Amy is barely showing signs of improvement. However, her brain is still active, Amy is still alive. Jacob visits her many, many times but continues to hide her from his pregnant wife. When Alex begins writing an article for The Times, she tracks down a few of Amy's old friends, Jacob in particular. The two of them begin their own investigation to find who did this to Amy and why. They feel obligated to get the answers for Amy, when she can't get them herself. Following any lead they can get leads to her stepfather, her real father, even the old man down the street. Who could be Amy's secret man?
This novel definitely has the potential to become something more. Some of the viewpoint seemed a tad misplaced to me but overall it was a great read!

Mark your calendars, Try Not to Breathe comes out February 23rd!

Looking for other books by Holly Seddon?
Don't Close Your Eyes
Love Will Tear Us Apart

Want to hear my exclusive interview with Holly?
Meet Holly Seddon
Posted by Jessica at 1:57 PM No comments: 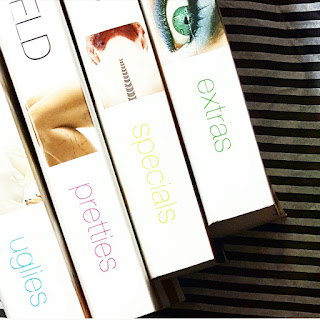 Pretties, the second book in the Uglies Saga starts with pretty-minded Tally Youngblood becoming a Crim with Shay. To become a Crim, you have to pull some pretty Ugly tricks. You want to be the talk of the town. For Tally, that's easy. But for some reason, she can't shake her old, ugly life. The New Smoke is looking for her, David is looking for her. They need her to take the cure, while keeping her bubbly act. She and Zane, her newfound love, take the cure together; one pill each. Before too long they feel cured. The talk the Crim's into all sorts of tricks, including running away to join the New Smoke. A few hot air balloons, some hover boards, and a long leap until everyone but Tally makes it to the New Smoke. Instead, Tally becomes a God. She makes friends with the village people. She ventures to the end of the world and finds a Special Circumstances Headquarters. She needs her friends. The New Smoke needs her. David needs her. But Zane really needs her. Tally has to face the facts. Could she really be something more? Could Tally-wa be Special?

Looking for the rest of the saga?
Uglies (Uglies Saga #1)

Looking for other books by Scott Westerfeld?
Afterworlds
Posted by Jessica at 2:16 PM No comments: 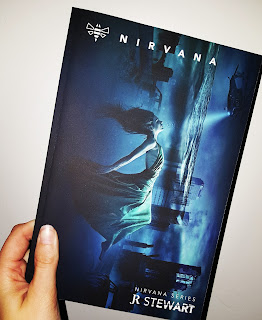 DigiWriting provided me a finalized copy of Nirvana and NetGalley provided me with an advanced reader's copy of Nirvana, a dystopian society where the Hexagon rules all.The planet has slowly died, the Extinction has taken over. Where can you go when the world is dead? Andrew has dedicated his life to his research. When he goes missing Kenders is determined to find him. "Grieving" Kenders can't accept the fact that he's dead. In Nirvana, she sees Andrew. It's not a programmed loop, he just wants to "tell her over coffee." Kenders goes on a spree trying to find everything virtual Andrew is looking for. She needs Serge's help. But can she trust him? Serge pushes through and does everything he can for Kenders. Even risking his own life as a diversion to get her back to Andrew.

The finalized copy I received was improved so much! The snapshots of a movie that I mentioned earlier have changed drastically, and it was definitely for the better. I can honestly say with the right producer, this would make an amazing movie.
I'm so excited that I had the opportunity to be a part of this novel! I will absolutely be reading the next two books in the Nirvana Trilogy!
Posted by Jessica at 2:02 PM No comments: 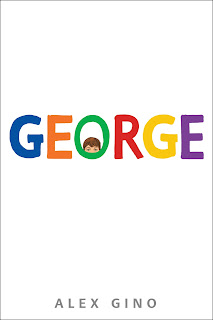 Meet George, a 10 year old boy who thinks he's a girl. Every year at school, the fifth graders get to put on a school play. This year it is Charlotte's Web and George wants to be Charlotte sooooo badly. During auditions, George reads for Charlotte's spot and the teacher explains that he cannot play a girl in the play. But George doesn't understand because he KNOWS he's a girl. He questions his sexuality. He tries to tell his mother. But for some reason only Kelly can hear him. Kelly lets him dress up like a girl and talk about girly things. Towards the end, Kelly decides he should play Charlotte and they won't tell anyone of the actor switch. It comes as a shock to everyone. A BOY playing CHARLOTTE? That's crazy! But George knows he's a girl, even when the boys at school pick on him and start fights. George knows.

Now, I'd like to put my opinion here. Alex Gino worked on this book for 12 years but only came up with a basic working mind of a 10 year old. At 10 years old, children shouldn't be questioning their sexuality, they shouldn't even know what that is. Growing up with only a sister, one of us always had to play the father when we played house. Girls can play as boys and boys can play as girls, that does not make you a transgender at age 10. Defining our children at such a young age doesn't help or hurt them. As we grow older, we change. Our tastes change. As children we do not know who we are or what we want.


UPDATE:
I just want to come back out and edit this.
Since reading George, I've taken several psychology classes and child development classes.
I think that when I first read this I was making conclusions based on my own experiences. But with the knowledge that I have now, I can honestly say I was wrong. We don't give kids enough credit for understanding their own feelings. We can't make them feel a certain way, we can't possible understand things from their mind. They are individuals who know their own thoughts.
That being said, I still don't like the way this book was written. I don't think Alex Gino got the idea out that he was trying to portray. It was an attempt to bring this new culture into the lives of children, which is great but it wasn't executed in a way that makes sense to all readers.
Posted by Jessica at 12:32 AM No comments: