The Books of Awesome 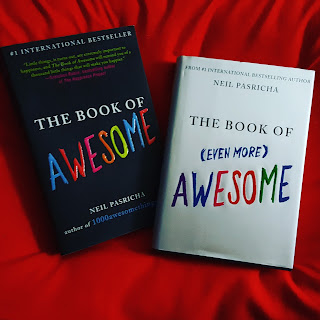 The title explains it all! The Book of Awesome and The Book of (Even More) Awesome reminds us of the little things in life that we take advantage of. Who else loves the way sheets feel after being taken straight out of the dryer? Or the smell of freshly baked bread? Or even when a baby holds onto one of our fingers? Some things in life are just there to make us smile. Neil Pasricha gives us the run down on all the wonderful things we seem to just forget about. These two books remind us to cherish the things we don't think of everyday. If anyone is ever in the need for a smile, just pick up one of these. I promise, they will make your day. :)

Check out his website 1000awesomethings.com You won't regret it!

Looking for other awesome books?
The Book of (Holiday) Awesome
Posted by Jessica at 7:55 AM No comments:

The intro to my blog!
Posted by Jessica at 9:33 AM No comments: 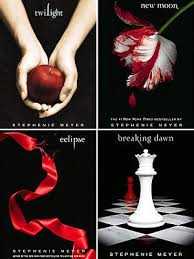 Hello Twilight fans! If you haven't read these four books, you're missing out. Stephanie Meyer really took hold of my emotions and sent them flying through a whirlwind of feelings. Twilight starts off with a teenage girl named Bella who moves to the rainy city of Forks, Washington. Starting off her new life with her father, she falls for childhood friend, Jacob Black. Not long after starting at her new school, she catches the eye of Edward Cullen.
In the second book, New Moon, Bella finds out Jacob is a werewolf! Not to mention, her boyfriend Edward is a vampire! The Cullen clan moves away from Forks, claiming to be putting Bella into extreme danger. However, Edward is still madly in love with her. His sister, Alice, has a vision of Bella jumping off a cliff. Thinking his one and only is dead, he rushes to Italy to ask the Volturi to kill him! In the end, Bella agrees to marry Edward.
In Eclipse, the love triangle flares up more than ever. Bella and Edward are making wedding plans and deciding on a date to turn her into a vampire. Then, Jacob kisses Bella and makes her so angry she punches him in the face and breaks her hand. Suddenly, a group of newborn vampires are hunting Bella. The Cullen clan and Jacob's werewolf pack band together to protect her.
Breaking Dawn, the best and final book in the saga. Edward and Bella finally get married! They have a cute little girl named Renesmee, a mix between both of their mother's names. Renesmee is half human, half vampire because Bella has not been turned yet. While in labor, Bella must become a vampire to live. Jacob actually imprints, or falls in love with, Renesmee. Once again, the werewolves and the vampires ban together to fight the Volturi to the death.

Looking for the rest of the series?
The Short Second Life of Bree Tanner (Twilight Saga #3.5)
Posted by Jessica at 10:02 AM No comments:

The Catcher In The Rye 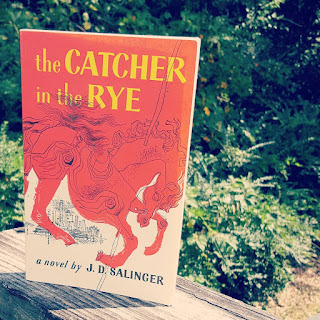 Everyone can relate to the awkwardness of Holden Caulfield. Growing up is hard when no one is there for you. After being kicked out of school, Holden's family sends him to an all boys boarding school, where he rooms with an extremely conceited boy. Quickly, he gets kicked out of here too. On the up side, Holden can't wait to see his little sister, but he's scared of facing his parents. Sneaking into his own house, Holden tells Phoebe she can't tell anyone where he is or where he's going. Leaving school, Phoebe tries to run away with him. Holden has to grow up and realize the things happening to him are not the end of the world. The Catcher In The Rye is also a coming of age book. I recommend to everyone to pick up a copy of this great read.

Thankfully, this book is no longer banned in schools. I honestly cannot see why it ever was. How do all of you feel about the controversy over The Catcher In The Rye? Give me your opinions. :)
Posted by Jessica at 9:32 AM 1 comment: 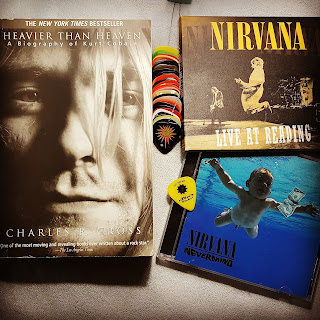 Charles Cross leads you through the rise and fall of Nirvana's frontman, Kurt Cobain. Cross examines the Cobain households and talks to Kurt's former classmates. As he retells the horrific home life of Kurt, we feel the heartache that Kurt was feeling as a child. Loneliness and hurt was evident from the very beginning. All throughout his childhood and teen years, Kurt constantly felt rejected and alone. Early on, Kurt possessed an amazing amount of talent. Although he had a tough time at home, and a tough time at school, he knew he would one day be in a band. Cross takes us on Kurt's journey to fame. After marrying Courtney Love and having his baby girl, Francis Bean Cobain, Kurt shot himself. Leaving behind a chilling suicide note, Kurt leaves us hanging. What made him want to leave this beautiful world for us to live in without this magnificent musical icon from the '90s? We may never know. If you grew up listening to Nirvana and are a die-hard Kurt Cobain fan, you will absolutely love this book!

"It's better to burn out than fade away."

To read more on Kurt Cobain's life, check out my website: http://thelifeofkurtcobain.weebly.com
Enjoy. :)

Looking for other books on Kurt Cobain?
27
Life on Planet Rock
Who Killed Kurt Cobain?
Posted by Jessica at 9:46 AM No comments: