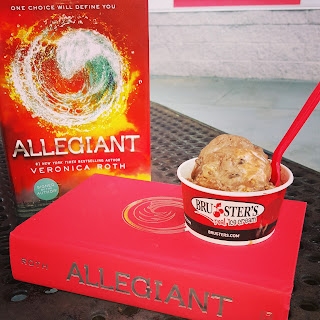 I think I'm in love with this book.

Allegiant is written from two different points of view, Tris AND Tobias. Our journey starts with Tris, awaiting her trial. Tobias is forbidden to see her because of his mother, Evelyn, the leader of the factionless. But of course, we know he's going to talk to Tris. Soon enough, the unexpected happens. There's a rebel group called Allegiant forming. They are dead set against the factionless and Evelyn. They want to send some of the Divergent into the city. Tris is invited to join, and in turn tells Tobias about it. A small group is chosen to go to the city, including the two of them. Arriving in the city, they come across Tobias's Dauntless leader. Another twist, everyone in the city knows Tris's mother. But how could that be? The government leader gives Tris her mother's old journal, giving her only a few answers and a lot more questions. Soon after, the greatest twist of ever happens. TOBIAS TURNS ON TRIS. He joins the rebellion group within the government! Not realizing the terrible plans that he was a part of. In turn, Tris starts ANOTHER rebellion group, using the plans from the first group and improving them. There's so much that happens, and I left A LOT out. But this whole review would be spoilers.

Lets just put it this way:
I cried.
I hated Tobias, just to love him again.
I cried again.
I hated my life.
I cried some more.
I felt like my whole life was built on lies.
Oh, did I mention I cried?

All in all, very VERY well done Veronica.

Looking for other books by Veronica Roth?
Carve the Mark (CTM #1)
The Fates Divide (CTM #2)
The End and Other Beginnings
Posted by Jessica at 9:16 PM No comments: 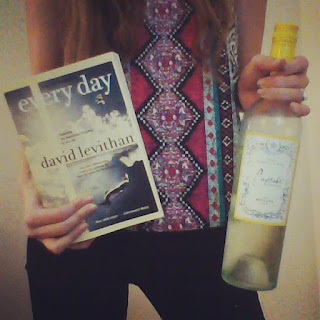 Ever wonder what it would be like to be someone different everyday? Well, this guy does. He can be Kimberly, or Michael, or Jose, or Rhiannon, or any other person. But here's the catch, he only stays in their body for one day. Every day starts out the same, waking up and discovering who he is today. Just going day by day, learning and discovering new things, only wondering what awaits him tomorrow. One day, he wakes up in the body of Justin. He meets Justin's girlfriend, Rhiannon, and falls in love with her. He knows Justin isn't good to her, but he could be. He lets her see what Justin could be like. She falls in love with him all over again. Too bad it's not really Justin. "A" wants to show Rhiannon what happens to him everyday, thinking he could finally let someone see the real person he is. There is so much to this book, I don't know how to explain without giving away spoilers. I never expected half the stuff in this book to happen. Please, please, PLEASE read this amazing book and give me some feedback! It definitely pulled on my heartstrings, and I would love to talk about it!