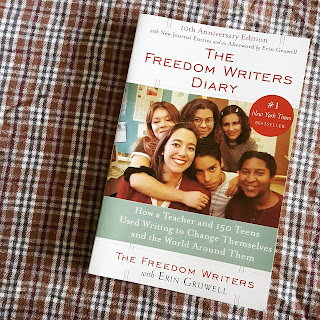 Erin Gruwell was on a mission to teach. Little did she know, she'd be teaching the kids that didn't fit in, the kids that would never amount to anything, the kids that wouldn't live to see graduation...
Mrs. G started her first day with the hopes of making a difference. Instead, her students ruled the classroom. They hated each other, but collectively hated Mrs. G even more. These kids had seen and experienced more things than most people see in their entire lives. Yet, they were only 14 and 15 years old. The Freedom Writers started as a class project. Each day students were encouraged to write about their home lives, their family lives, and themselves. They were private diaries, unless the allowed Mrs. G the privilege to read into their lives. She learned how tough this kids lives were. They were homeless, abused, drug addicts, alcoholics, gang members, even mothers. Mrs. G was an outsider; she didn't know the dynamics of Long Beach. She didn't know the violence these kids faced every day on their way to and from school. She began to realize what she needed to do. She needed to teach the kids to pick up a pen and put down the gun.
The Freedom Writers made a name for themselves with the help of Mrs. G and Room 203, their "kick-it spot." Mrs. G became their voice, their mentor, and their mother. She made learning an experience they will never forget. The journals were just the beginning. Sophomore year, Mrs. G found books that related to some of the experiences her students had been through. Such as The Diary of Anne Frank, Zlata's Diary: A Child's Life in Sarajevo, The Catcher in the Rye, The Color Purple, and countless articles. Mrs. G arranged many visits ranging from Zlata herself, to Miep Gies, to John Tu, to many government officials. Her students also had a chance to go to Washington D.C., New York, and Europe. This mission changed their lives. The Freedom Writers became a household name. The Freedom Writers wanted to make a difference, the Freedom Writers DID make a difference, and continue making a difference today!
THE FREEDOM WRITERS HAVE A DREAM AND THAT DREAM HAS COME TRUE.

Monster: The Autobiography of an L.A. Gang Member 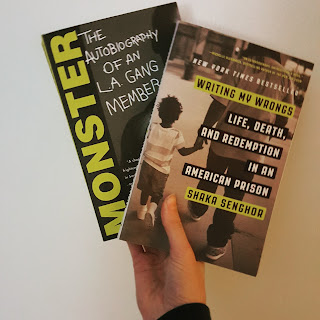 I was pleasantly surprised when my teacher assigned this as one of our required readings. Monster Kody Scott was initiated into the Crips at age 11. By age 16 his body count had to be well over 50. By 18, he was in and out of courts, juvenile halls, and eventually prisons. This autobiography is a tell all on gang violence, but more importantly, black on black violence. Monster was an Eight Tray Gangster, he went on to become an O.G. which could quite possibly be the highest honor in the gang world. But in the real world, what did that mean for his daughter? The violence all around the 'hood was too much to ignore. Violence is met with violence. If they were on enemy territory, you can expect bullets to be flying. If enemies came into their territory, people were going to be put down. These children, and I say children because that's what they were, were going out to find people to kill. They were going out to steal weapons, pick fights, and stake out the enemies! They were literally going out LOOKING for trouble! Monster finally realized the absurdity of gang life while he was in prison. He began attending Muslim services and learning of oppression. He became close friends with Muhammad who began teaching him Kiswahili and the ways to fight oppression without violence. Not once did Muhammad tell Monster to stop banging, just to stop the violence within his own set. Monster realized you cannot make peace with your enemies if there is not peace within your set. This change took time, effort, and a lot of explaining to the set.
Upon release from San Quentin, Monster Kody Scott- O.G. Gang Banger became Sanyika Shakur- Revolutionary.