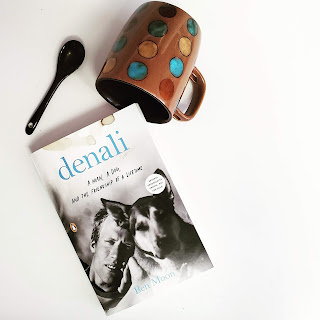 Ben Moon was in his mid-20s, living near the mountains, and trying to save his crumbling marriage. This was never the life he wanted, but he began building his new life around climbing, surfing, and photography. That's when he knew he needed a new companion, a dog. Denali was just a few weeks old when Ben spotted him in the shelter. He knew this was the dog he wanted to spend forever with.

Ben and Denali lived in a van, living the "dirtbag" lifestyle. They lived a life on the road, camping near Ben's climbing sites and enjoying every ounce of fresh air nature could offer. Until Ben was diagnosed with colorectal cancer, ultimately halting their nomadic lifestyle for the immediate future. Ben put out the diagnosis for as long as he could possibly handle. When he heard the news that he would have to use a colostomy bag for the rest of his life, his world was turned upside down. How could he continue climbing and surfing? How was this going to affect his career and future? He was an athlete through and through.

Denali stood by his side through every chemo treatment, every metallic sweat filled night, every trip to the bathroom to vomit. Denali became his only constant throughout his entire journey. So when Denali's body became cancer-ridden, Ben knew he had to step up for his best friend, his confidante, his dog. The two of them continued on adventures until Denali's very last breath.

Denali was a quick read for me.
I expected it to be about Ben and Denali's relationship more so than Ben's cancer diagnosis. With quirky inserts of what can only be described as Denali's innermost thoughts, Ben included Denali in every aspect of the book. It was almost as if a subtle mentioning of Denali made you love their relationship even more. Some people have a rare, raw relationship with their dogs and I definitely can tell that through Ben and Denali's life together. They steadied each other for many years until Denali's time had come. They truly loved one another.

After Denali, Ben wanted to do something special for him.
I'm including the short film Ben Moon, Ben Knight, and Skip Armstrong made in his honor.
Beware, I cried. A lot.

Huge thanks to Penguin Random House for sending me an arc!
Denali hits shelves January 14, 2020!
Posted by Jessica at 8:16 PM